Barbara Toschi and Jason Fité are a UK-based directing, producing and writing duo who have brought us the award-winning short film Mea Culpa (2018), about a man who finds himself in a hotel with no recollection of how he got there, a prickly concierge and an enigmatic fellow hotel guest. A game of chess at the very beginning of the film hints at what is about to unfold…

Jason (writer and director) and Barbara (producer) joined me to discuss the idea for the film, how Sean Young (Blade Runner) came to be involved, the perils of casting, and explain the Easter egg which you should see on screen for many years to come…

FF: What gave you, Jason, the idea for this film?

JF: It’s got quite a convoluted origin actually. About 5 years ago I read a book called ‘The Tyrants’ which is about the evil people of history like Hitler and Genghis Khan etc. I was just kind of trying to work out, from a psychological point of view, what their justification was for the way they behaved, as in: they didn’t see themselves as being evil or bad people.

I was going to do a spoof documentary originally, where we held interviews with these terrible people from history. And then, somehow – I can’t remember the process that well – it became a fiction script, where a major criminal or tyrant then had to give his ultimate interview which is justifying his existence and saying why he committed these evil deeds. It’s his belief system; how he justifies his actions. It wasn’t a structured thinking process, it just kind of evolved that way.

FF: What brought you to make the casting decisions and how did Sean Young come to be involved in the project?

JF: Sean is a friend of a friend and she happened to be in the UK at the same time that we were doing the casting.

I was meant to be meeting with her but that didn’t happen, so, sort of out of the blue, I got in touch with her and said ‘we’re just doing this script and would you be interested?’, which is kind of a random thing! I thought it was very much a long shot – she’s a Hollywood icon and I’ve kind of admired her since I was 13 or 14. I used to have a poster on my bedroom wall… I didn’t mention that to her at the time! She liked the script and signed on which was quite an amazing reaction to have actually.

BT: (on Leonie Zeumer and Paul Dewdney’s casting) We were going through agencies and were trying to get someone that would fit the roles, but a lot of the actors we contacted were busy. This can take some time and we didn’t want to get someone that wouldn’t be able to deliver what we were expecting. We were trying hard to arrange the bookings and it was like a week before the film and we didn’t have the cast confirmed! So we start digging on actors we’ve worked before. We had Leonie for our film that is currently post-production now. I had also worked before with Paul on another film. So I spoke with Jason and we called them just a few days before filming.

JF: Not having two of the actors cast just days before filming… It was a little bit scary! 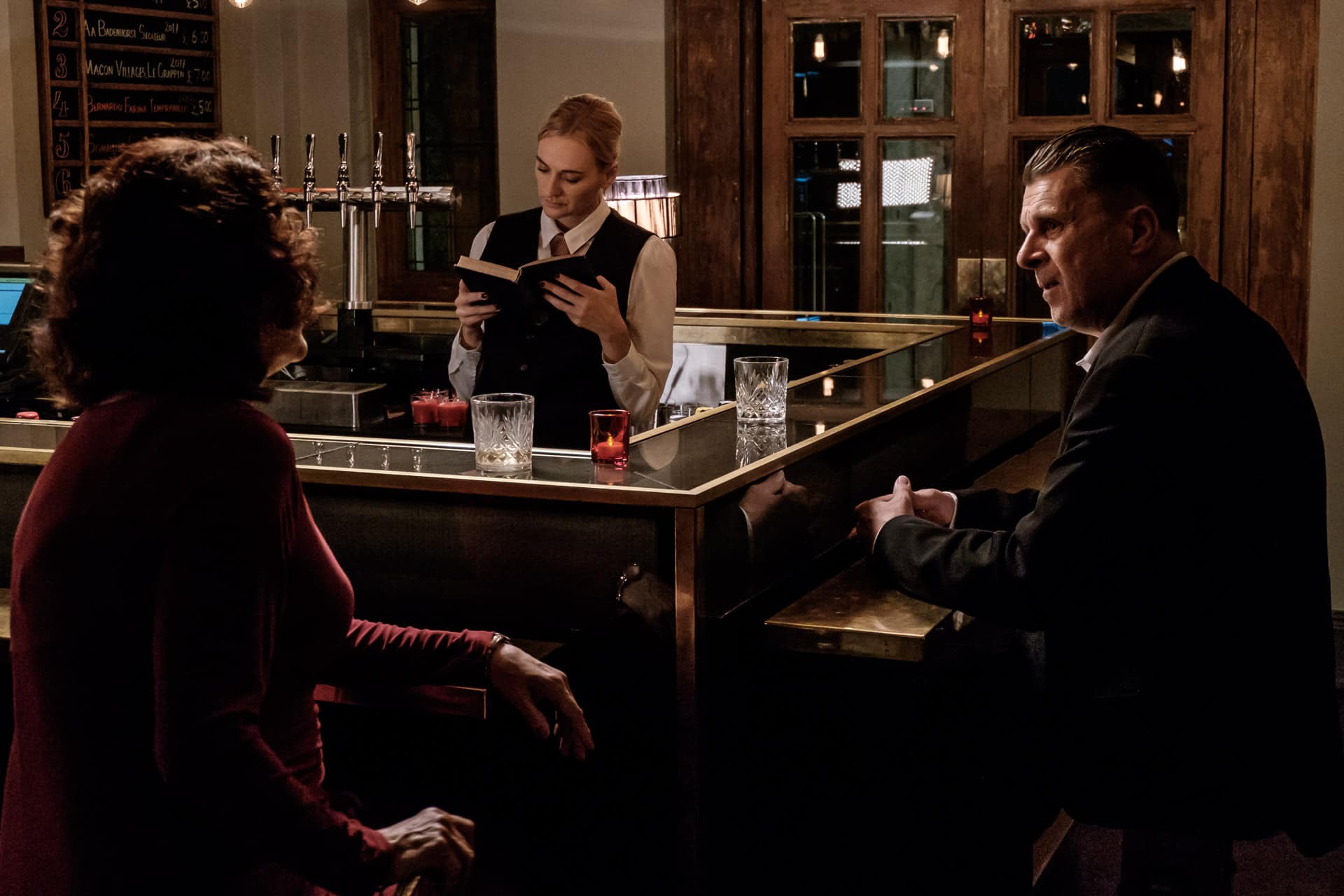 FF: Especially for a film that has three characters!

JF: It almost got to the point where I was going to play one of the characters. It was that, kind of, desperate. Yes, I think we had a lucky escape there! Leonie was really great; we’d worked with her before. So, we rang her on Friday afternoon and asked her to come for an audition on Monday – it was that kind of short notice. Then she came in for the rehearsal and it just went really well. So that’s the amazing thing… even though it was so last minute everything came together for the shooting dates.

BT: Yeah, it was reassuring that we knew the actors and we were confident they could play the roles.

JF: It all came together very much at almost the last minute.

FF: What challenges did you face during filming and did the final version come close to what you set out to achieve?

JF: So, the biggest challenge, after the casting, which came out fine, was that I foolishly thought it would not be difficult to shoot a 16 minute scene in one day, which I now know is almost impossible! I’ll never ever do that again. I don’t know how we did it but we did it. And it came out much better than I expected actually. In theory you shouldn’t be able to film a 16 minute scene in one day but we somehow did it. We had a very good team and they were very, very much committed to it. It’s normal that on every film set, something will go wrong that will put everything back for several hours. I think Barbara made a deal with the devil because nothing went wrong on those shooting days. I’ve never had happen before – normally something always goes wrong! It was almost too good… 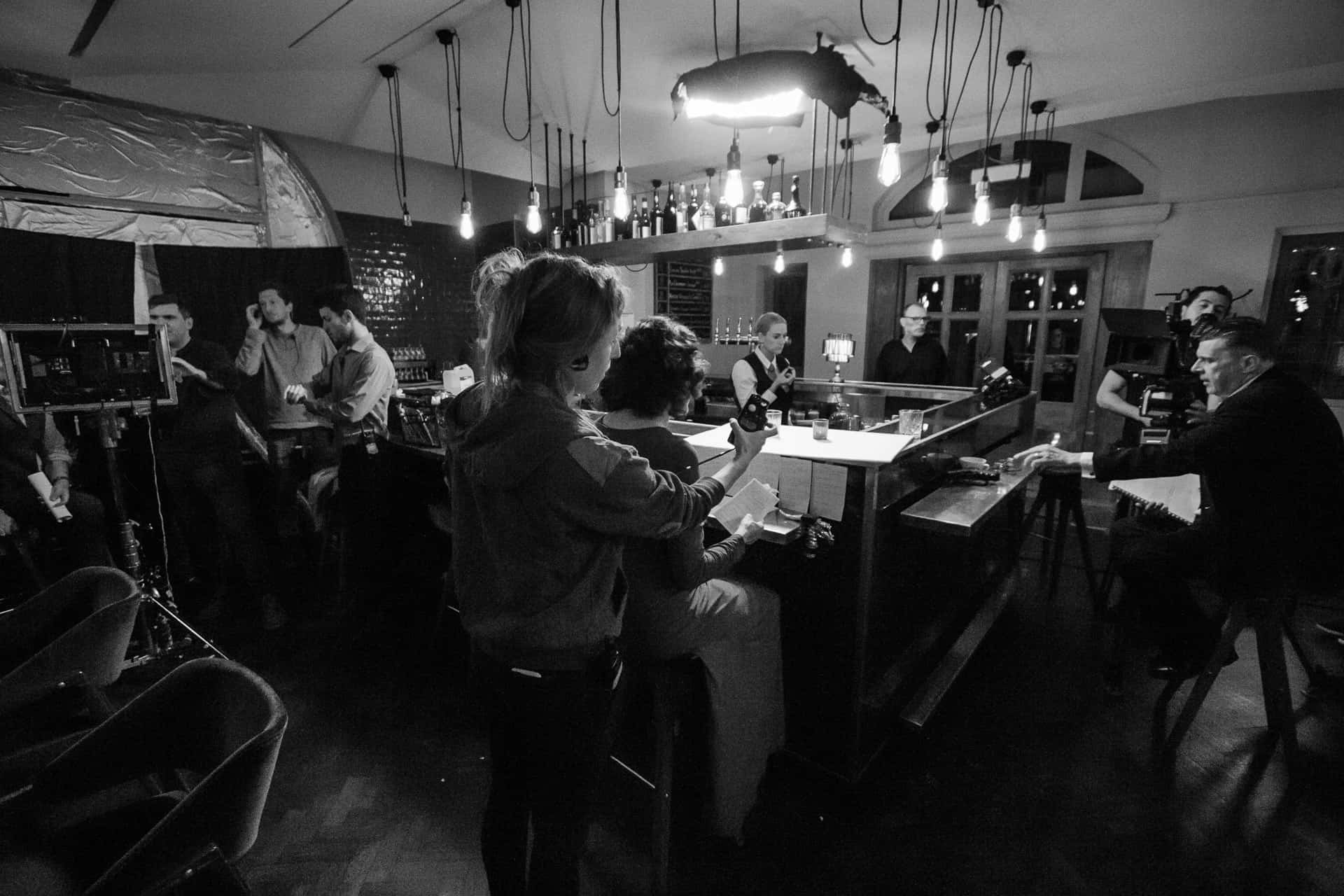 FF: What’s the main takeaway that you’d like the audience to have from this film?

JF: Personally, I see it as a film about redemption. So, it’s about a person who has done some pretty terrible things being confronted with his own crimes, then actually getting to the point that he does have a confession and also he has a breakthrough in that he understands the consequences of what he’s done and he’s finally faced with his own actions. It’s the human journey of how this character becomes a better person. 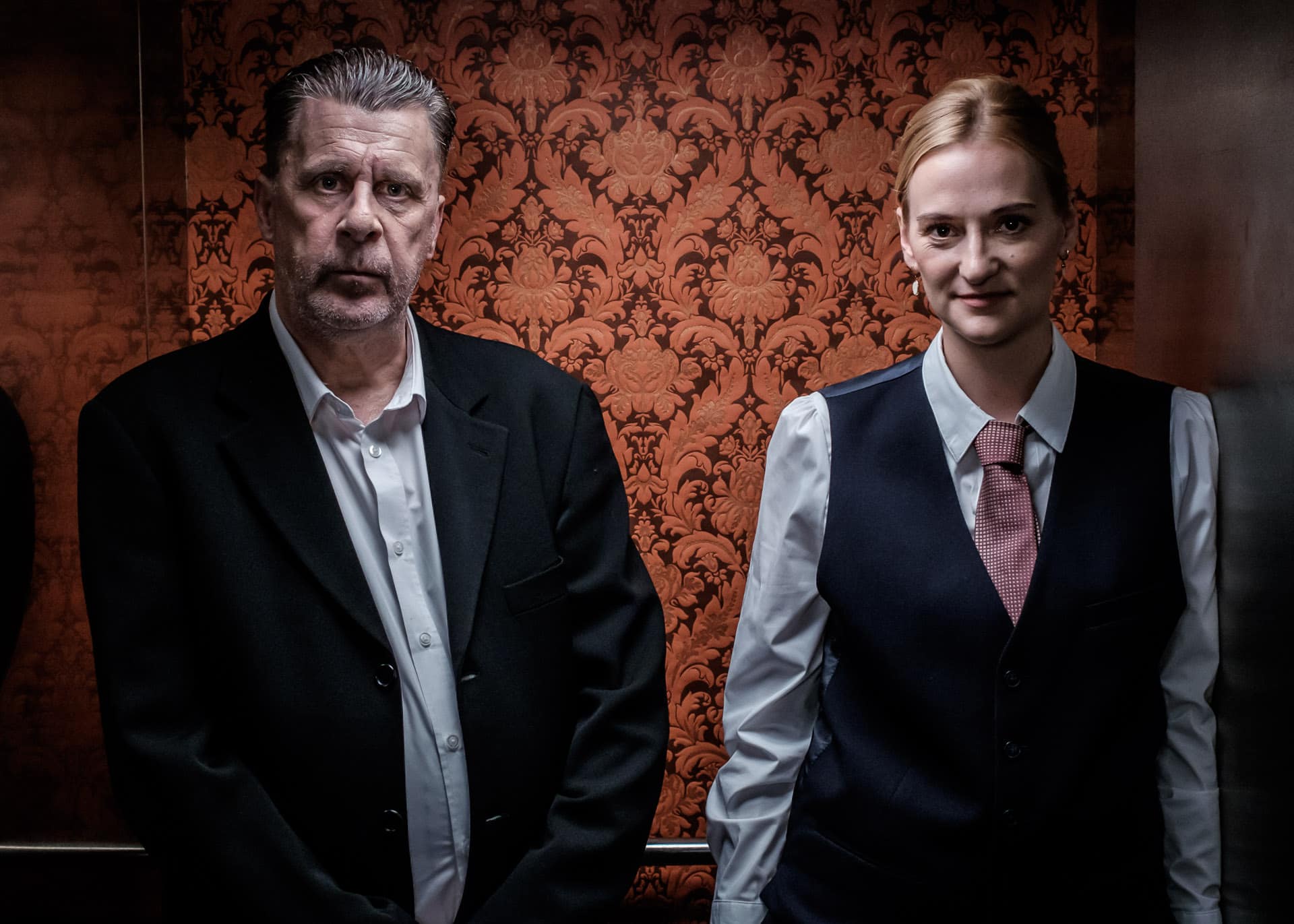 FF: Who is Mr Castlin? A corrupt political leader/dictator in which country?

JF: It’s not really identified in the script or the film as such but in my mind it’s actually set some time in the future. England has become a very different kind of country, almost a fascist state. It’s drawing comparisons to Russia from about 1992 where, basically, the very strong, almost criminal characters rose to power. Castlin is, basically, one of these people who kind of ruled by strength. Not necessarily an evil character, but one who does what we would define as being evil or carrying out corrupt deeds to get to power.

The name itself, ‘Castlin’, is a combination of ‘Castro’ and ‘Stalin’. They were two reference points that I was drawing on. Again, both of those characters, Castro and Stalin, and many others, they committed unforgivable atrocities but they started off being very idealistic. So, this is about how they became corrupted. My version of this was actually set maybe 20 – 30 years in the future, where Castlin has become powerful and he’s equivalent to being Prime Minister or a Dictator.

FF: Is there any importance attached to the book that The Concierge is reading?

JF: Yes. It’s kind of an Easter egg… So, the book also features in our previous film Through a Dark Mirror; one of the characters is reading the book and the idea is that, moving forward, I think, all our projects will have the book appearing at some point in the background or being read by a character. A bit like a Hitchcock cameo but with a book.

Also we’re developing a TV series called ‘The Heroes’, which is the name of the book (by Charles Kingsley). It’s kind of very loosely tied in with that as well. It’s a children’s book of Greek mythology which I’ve had for years and years, so it’s kind of got sentimental value and it just seemed to tie-in with what we were doing, essentially. 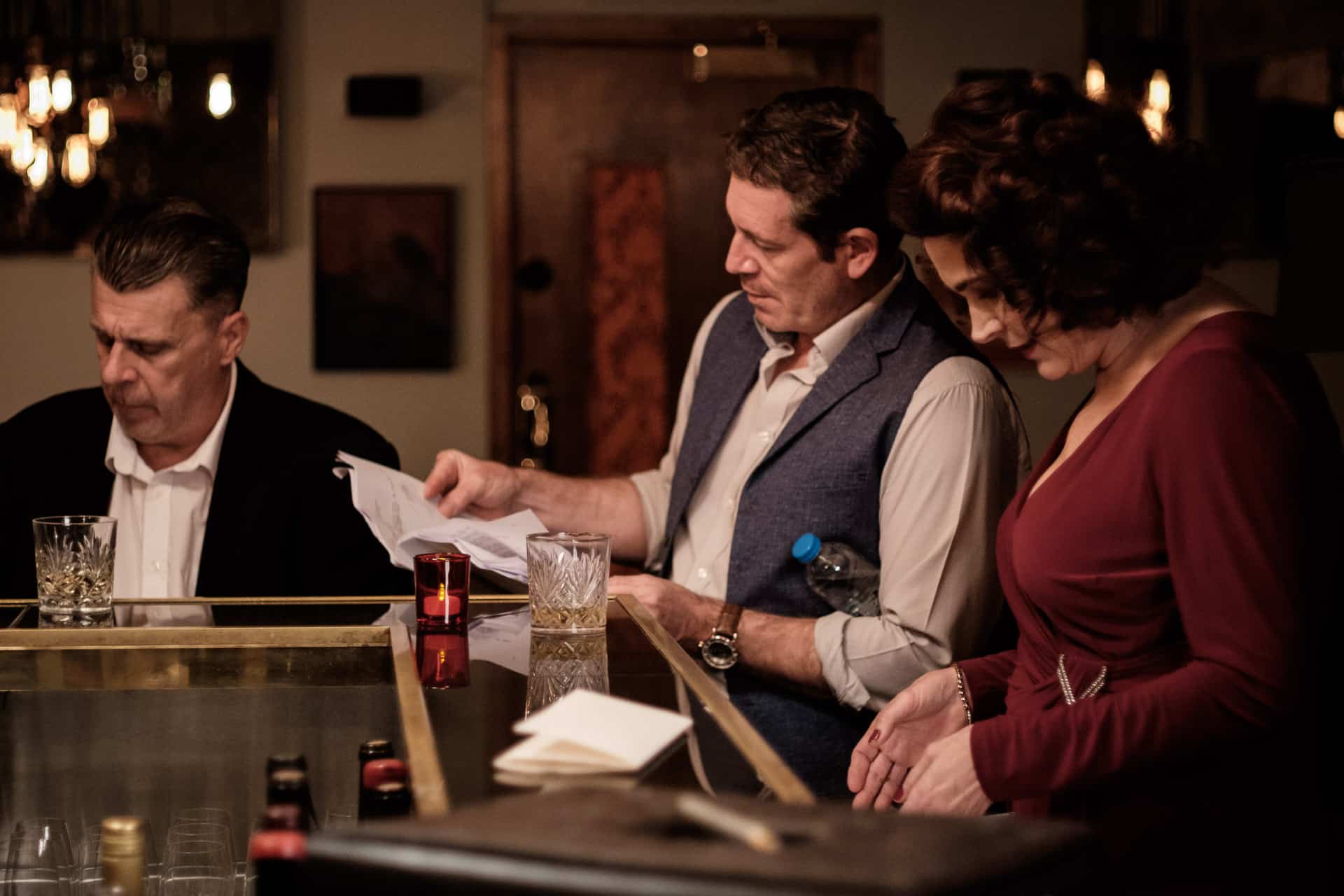 FF: You’re both writers, producers and directors to name just three roles. If you could choose one of the roles for the rest of your career, which one would you go for and why?

BT: I like both very much. For me, I’d say I like directing more, that’s my end goal. But I also believe that the best directors from years ago were also producers, so they have a better understanding about what they’re doing in production, I think that one complements the other. And I love producing too, it’s something that I actually enjoy. It’s weird to say, but I do like the stress of getting things done, solving problems, dealing with people etc.

JF: Good question! Writing has always been my main love and passion and it’s exciting because I essentially get to ‘play God’ and create new worlds and characters to inhabit them, which is a very thrilling and engrossing process.  However, it’s also a very isolating occupation, so locking yourself away with nothing but your own imagination for company can be quite difficult.

Producing is very rewarding because you get to bring the script to life and make it a reality. I also really love the casting process as quite often an actor will do something amazing and unexpected with the role which can be quite a magical moment.

Directing can be surprisingly exhausting but it’s also the most fun part of the process for me. We have built up a really great production team and repertoire of actors with whom we work with on a regular basis so there is something of a ‘family feel’ on our sets which I really enjoy.

So, to answer the question, I will say ‘directing’ (but I will probably change my mind at some point when I start missing writing or producing!).

FF: A look on IMDb tells me that you’re both involved in a number of projects currently. What are you working on right now?

JF: There’s a film we’re hopefully shooting in July 2019, a feature; it’s not on IMDb (at the time of the interview). It’s a psychological thriller about a woman who kills lots of people, but we’re not quite sure why, until the end, and it says it’s kind of like a modern day Hitchcock thriller, quite dark, quite psychological.

And there’s quite a few twists at the end as well, which I’m still working on. It’s good, I’m actually surprising myself which is a good thing. So, I’m not entirely sure how it ends. If I’m surprised then I think the audience will probably be surprised as well.

BT: We also have another feature film set to shoot later this year called Bernie Davis, a comedy about a plumber and exorcist. Plus, our film Through a Dark Mirror (2019) is in final stages of post-production, so there quite a lot going on at the moment, which is good.